Scooter, Erl, Mo, and Biz represented WEDALI at Wild Adventure Race's Spring 12-Hour on May 9, 2009 in Red Wing, MN. The race started in Colvill Park, just south of Barn Bluff along the Mississippi River.
Out of the gate, teams ran most of the way up Memorial Park Drive and back down into Red Wing via a foot trail. 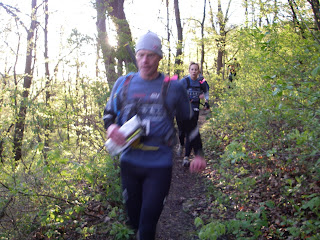 An urban O-section routed teams to a few more hills and a bridge crossing into Wisconsin. A dash to the boats ensued after the hour-long run, with 24Seven less than a minute behind. WEDALI made a quick TA into the orange duckys and, with the help of their 4-piece Aquabound paddles carried during the trek, were able to put a small gap on the field during the ~7 mile paddle. After returning to Colvill Park, teams biked to Barn Bluff and completed a short trekking section that included two traverses and a sweet 50-foot rappel. 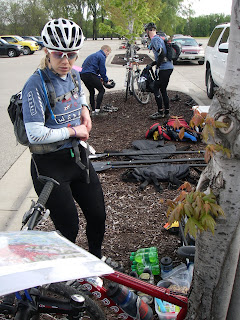 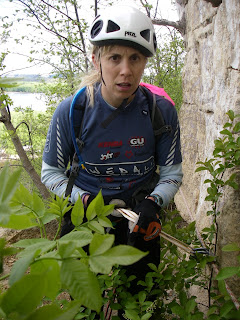 The course then took teams out on a 27-mile bike through the river bluffs of Wisconsin and back to Memorial Park in Red Wing, MN. A few trekking CPs later, WEDALI cruised back down Memorial Park Drive and into Colvill Park, finishing the race 1st overall in a time of 6 Hours, 55 Minutes. Less than three minutes separated 2nd and 3rd places, as The Beautiful People and Midwest Mountaineering finished in 7:18 and 7:21, respectively. 24Seven rouded out the top 4 in 7:34.
A BIG thanks to all of our "fans" that came out to see the race! We had an awesome time hanging out afterwards, sharing stories, and catching up with all the Minnesota (and non-MN) AR folks.

On May 2, Andrea rocked out at the Swanson River City Shootout, the second XC mountain bike race in the Nebraska Lottery Psycowpath Series. The race took place in Swanson Park, located near Bellevue, NE. Andrea pushed hard and pulled off a 3rd place finish in the Women's Cat 1 race, knocking off four laps in less than 2 hours.
Newer Posts Older Posts Home
Subscribe to: Posts (Atom)