A Wild And Wonderful Odyssey

Next on the docket was Odyssey's Wild Wonderful 24-hour AR, May 21-22.  The trio of Tom, Kelly, and Justin teamed up with last week's rival navigator from Checkpoint Zero, Peter Jolles, to rehash some stories and to throw down on some of the local teams in the Virginia area.  We thought Peter looked pretty good in the jersey pre-race, but he actually wanted to breathe during the event, so wore a slightly better fitting kit for the race. 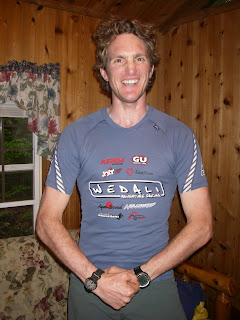 The race started off with a great paddle on the New River Gorge.  This was a great opportunity to test our bravery on some class IV - V rapids on the swiftly flowing water.  The area had received a decent amount of water recently, so things were flowing good.  Our team plowed through the section, paddled when we could, and held onto the boat tight when needed.  The mass start put us in wave 3 of 3, so our goal was to try and put us toward the front by the time we exited the water. therfore giving us a 5-10 minute advantage on the teams in front of us. 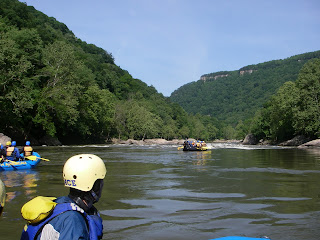 Sometimes we worried about speed, but sometimes we had to focus on the task at hand.  Kelly certainly enjoyed the ride the most, as a few of the sections looked pretty mean! 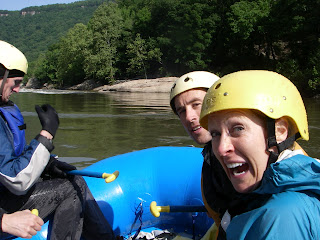 After exiting the water, we completed a decent trek along the bottom of the Endless Wall, one of the best climbing destinations on the east coast area.  Trekking involved a lot of route finding and creative bouldering. 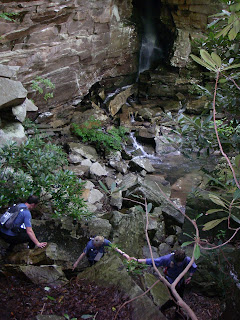 At times, the cliffs would rise straight above us for up to 150 feet! 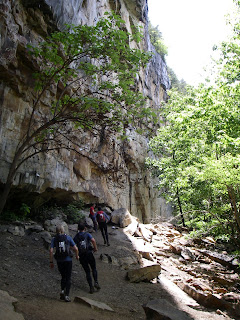 When we finally found the breakdown in the wall that would lead us to the top of the wall and a great lookout.  That CP offered us a great view of the New River Gorge that we had paddled down just an hour or so before. 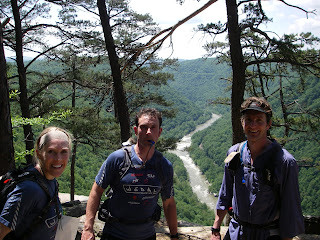 Our crew pushed the pace and the hot sun took it's toll.  The course rolled through some great low mountainous terrain.  We biked and trekked well, refilling on water when the trails and roads crossed a few streams from above.  Many of the features that we followed were old railroad grades and mining roads, a historic jaunt past an old mining establishment kept us aware of our surroundings in what must have been a very different place a hundred years ago.  The crux of the race came in the last Rogaine section, where we needed to claim all of the CPs and move on to be assured of a top ranking for the event.  Our crew did really well, but had issues with one point, located along a less than distinct "ridge" filled with logging slash.  We looked for over an hour, but couldn't find the point, so decided to move on with the thought that the point was misplaced.  The rest of the trek went well and it took us from day into night. 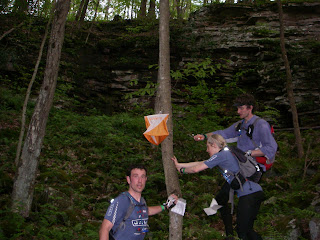 We returned to the TA and discussed the CP location with the race director.  In doing so, the race director told us that we were not allowed to return to the CP, even though doing so from the TA would be a high cost in time.  Our lead was significant at this point, roughly 3-4 hours, so not being able to revisit the CP area would essentially cost us the race if another team was able to garner all of the checkpoints.
We left the TA on a down note and biked to the finish without urgency. We finished rather unceremoniously in first, but knew our lead was tentative with so much time before the final cutoff.  IN the end, ImOnPoint and a solo racer would garner all of the CPs of the race, finishing 3-4 hours after us. It was a great event and the crew had a great time socializing with the other teams from the south.  ImOnPoint put together a great race, and in the end there persistence paid off with a win.
The trip to the deep south for Tom, Kelly, and Justin didn't yield a win in the results column, but all were grateful for the race experience, camaraderie, and general awesomeness of a road trip well done.  The teams that we met along the way were class acts, and made the trip even better.  We're looking forward to catching up with them again (on and off the course) later in the season!

Tom, Kelly, and Justin traveled to the southeast U.S. via car to race back-to-back events in two weekends. The May 14-15 Atomic AR, which took place near Amicalola Falls State Park, was our first race of two, and we were excited to start off the trip in the big hills of northern Georgia. The race was definitely one that we won't forget, although not for the best of reasons. Here's a shot of us before the start, preparing for the hoopla. 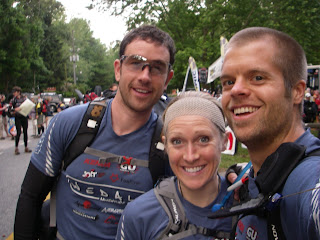 This event had a few "glitches," most of which are outlined very well by Peter Jolles of Checkpoint Zero in his race report entitled "Atomic AR or Atomic Bomb." Misplaced CPs, a paddle section involving a packraft over rapids, and a few other logistical details led to a less than satisfactory experience.  After our boat hit a stick within 30 meters of entering the river, we took a spare from the TA and headed out on foot to cover the paddling leg.  To skip a thick section of woods and to give us a break, we blew up our second boat and drifted down stream.  The outer chamber held for a few sets of rapids, but the floor blew out and we had no way to get water out of the boat after going through rapids.  Needless to say, drifting along the river in chilly water was a recipe for hypothermia, and we got off the water to generate some heat. 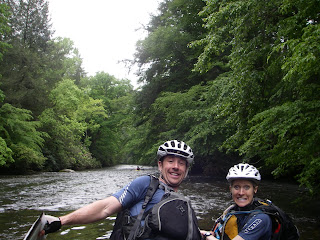 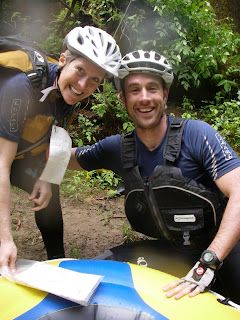 A few of the CPs later on had a tough time staying on the trees! 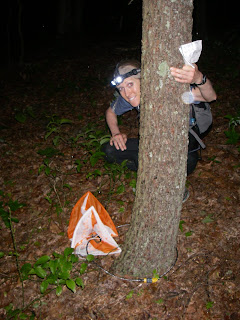 Later that night, we started to hit the wall and get low on food.  The course had us on a gnarly bike-whack late in the course, and it was a tough moment for our crew. 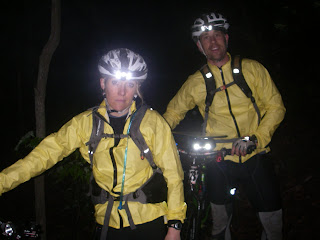 After a final orienteering section of a few hours, we hopped on our bikes and coasted down hill to the bottom of Amicalola Falls where, as in previous years, the finish was at the top of the falls! 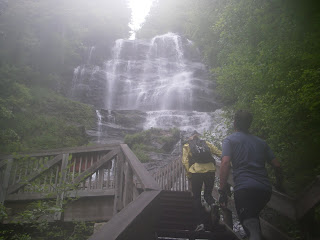 One more trek to the top and we were cooked.  It was a long race and one that we pushed hard throughout and battled some less than ideal conditions.  Checkpoint Zero came into the finish a few minutes after us, but had obtained one more CP than us earlier in the race, and so the win went to them.  Another close race for us in the hilly woods of Northern Georgia. 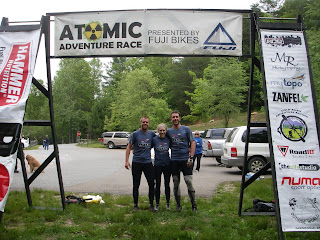