Thanks to a gracious photographer (and race director for Wild Adventure Race) named Jason Perreira, our team was able to garner a free slot into the Odyssey One Day adventure race on July 25. We submitted Jason's photo of Ellen sleeping on a tub, which was picked as 1 of 4 winning photos for the adventure racing stimulus bill contest, put on by Odyssey Adventure Racing and Checkpoint Zero. 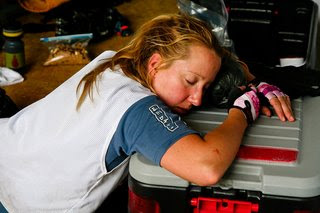 With two weeks to go until the race, Molly, Justin, Scott, & Scott set out to organize a weekend soiree into the Blue Ridge Mountains near Roanoke, Virginia....

After flying from Minneapolis to Washington-Dulles on Friday morning, driving 4-hours into central Virginia, putting our bikes together, eating dinner, attending the pre-race briefing, driving back to our hotel, plotting UTM coordinates, deciding routes, and finalizing gear, we finally hit the beds at 12:15am. Just in time for our 3:15am wake up call to drive back to the host venue, Wilderness Adventure at Eagle Landing (WAEL), for the 4:30am start.

The race began with a 2-mile "prologue" trail run around WAEL. We returned to our bikes after about 20 minutes, and tried to make a quick TA into our biking gear. The first bike leg started off with a 1 hour, 30 minute (2300') climb up ravel roads and forest service two track. What a view with the sun almost rising! We then rode down the other side, through Lignite and Surber to the Hoop Hole parking area for a trekking section.
CPs on the mostly-trail trek from Hoop Hole parking area were located in a swimming hole on the Hipe Branch, Rich Knob (3704'), Roaring Run Furnace (ruins from an iron furnace operated in pre-civil war days). 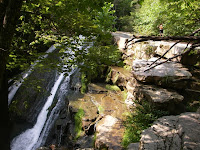 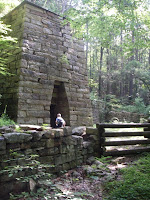 We ran back to the Hoop Hole parking area via road, stopping at a convenience store along the way to fill up on water and buying the last three Gatorades they had.
Returning to the TA, we passed a comprehensive gear check and transitioned back to bikes for a speedy pavement ride from Hoop Hole parking area to Eagle Rock public boat ramp, about 8.5 miles east. 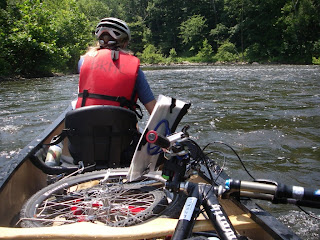 Erl and Scooter rocked Aquabound kayak paddles (that we carried with us the entire race) while Mo and Biz used the provided canoe paddles. Class 1 & 2 rapids made the trip exciting as we paddled during the hottest part of the day. 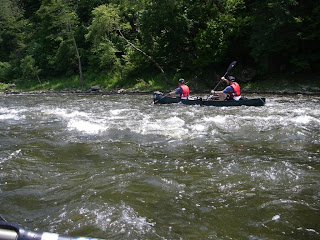 After getting off the water, we felt baked - wish we would have remembered to put on sunscreen at 4:30am! We hopped onto our bikes for a 24.5-mile ride back west on a mix of paved/gravel/two-track from Springwood to the intersection of FR5020 & FR184. The climb up to CP 12 and over the pass near the SW part of was straight out of the Tour de France (Twisty, +800'). We arrived at the Patterson Creek TA(Elev.1133') for the last trekking section about 30 minutes behind a solo racer, Triangle AR.

After finding the first two score-o CPs in daylight, night began to fall on the Patterson Creek area. A lightning storm passed overhead just as we were coming down off the top near CP K going to CPs E and A, which quickened our pace greatly. Biz was pretty sure that he has never navigated at night in such a downpour - visibility was seriously lacking at about 20 meters. Vegetation was also thick below thigh level along most "trails," which slowed the pace. Climbs to ridge tops at CPs K (2285') and G (2250') were "highlights." Erl and Biz also picked up 12 littered glass bottles at CP B and carried them through the rest of the race for a 12-minute time credit. Our team battled some stomach issues throughout the night, but was able to keep a steady pace late in the game. Here's us not looking too pretty... 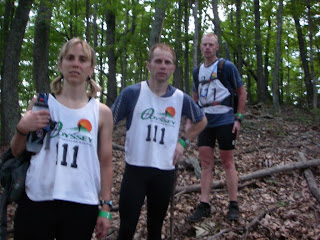 We returned to the Patterson Creek TA about 8.5 hours later to find ourselves in basically the same position as when we left - 2nd place overall with a 40-minute gap behind solo racer Triangle AR.

We biked the final leg from Patterson Creek area back to WAEL pavilion, crossing a knee deep stream along the way (maybe that's why the directions to WAEL don't tell you to go the short way?).
We finished the race in 24 hours, 21 minutes, garnering 1st in 4-person coed (and 2nd overall). Our 12 bottles brought our official time down to 24:09, with all mandatory and optional CPs. Triangle AR finished about an hour ahead of us and was the only other "team" to obtain all CPs. This was a tough race that definitely pushed us to the limits. A great east coast event put on by Odyssey AR with lots of awesome views from the Blue Ridge Mountains of

WEDALI in the Star Tribune

On July 19, WEDALI got a bit of press in the Star Tribune, the main newpaper in the Twin Cities area. The article, The anatomy of an adventure race, was written by local adventure racer (and nationally syndicated columnist) Stephen Regenold . Also known as The Gear Junkie, Regenold was named as one of Outside Magazine's Top Ten Adventure Twitters in April 2009.

On July 11, Scooter, Erl, Mo, and Biz raced in the 8th annual Adventure-O, hosted by the Minnesota Orienteering Club (MNOC). The race started in Minneopa State Park, southwest of Mankato, MN. In store for the racers over the next 7 hours was a challenging course with standard AR disciplines, and a few surprises....
After receiving maps and the UTM coordinates for three checkpoints 5 minutes before the start of the race, we were in hot pursuit of CP1 along with 30 other teams. Minneopa State Park has a mix of deciduous, grassland, and riverbluff/bottom vegetation - several erratic glacial features, including 2 meter boulders, also dot the landscape - which made precise navigation somewhat challenging over the 11-point O-section.
We arrived at the confluence of Minneopa Creek and the Minnesota River with a slim lead over the other teams, and were then directed to trek 1.5 miles upstream (instream) to CP 15, finding CPs 12-14 along the way. 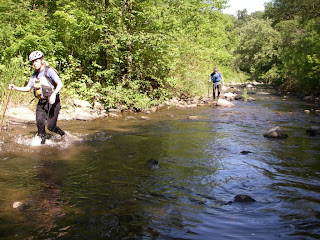 We passed under a few bridges over head, then through a small tunnel for a road. Then we came to a huge tunnel that we couldn't see the other side of - it was completely pitch black. Maybe this is why the race directors had "recommended" that we bring a headlamp! 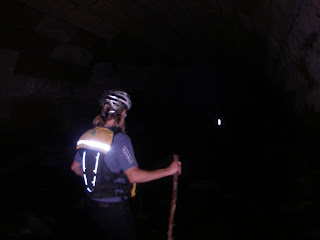 Holding tight to our make-shift "trekking" poles that we found on the way to the river, we precariously traversed the rocky, unknown ground, step by step, in total darkness. Sure Biz could have gotten that headlamp out of his pack before we got to the darkest part, but what fun would that have been? After a bend in the tunnel, we could finally see a small bit of light at the other end. We picked up our pace into the sunshine, and finished the creek trek at CP15 - the bottom of Minneopa Falls. 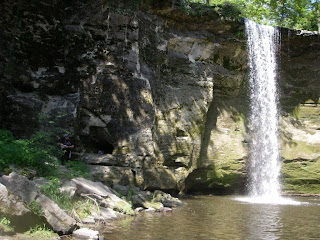 A short jaunt to the top and we transitioned to biking. We pushed the pace on the bikes a bit, as Andrew Kroese and Tom Puzak of Free Candy (24Seven) closed the gap from the O-section on the upstream trek. On the bike leg, we took a few different route choices, they had a flat tire (or two), and we made it to the paddle TA with a 5 minute lead.
We jumped into our inflatable kayaks and started paddling down the Le Sueur River. The water level was fairly low, around 200cfs, so we got caught on rocks and sandbars, and had to boat whack once or twice, emptying our "bathtubs" in the process. After about an hour and 40 minutes on the paddle, we exited river right to clean and rollup our inflatables and gear up for the next biking section.
We left the TA with a slim margin of 10 minutes over Free Candy, and we knew the next section, mountain biking at Mount Kato (a local ski hill), would suit their strengths. This score-o mountain bike leg had 9 controls that could be attained in any order, but had to be completed by staying on the trail and only going in the proper direction (no bike-whacking). A few of the black diamond trails were a bit sketchy and we were forced to hike-a-bike certain parts. After obtaining 8 of the CPs, we found ourselves at the bottom of the mountain with 1 CP to go. With only a 15 minute penalty for each missed CP, we decided that biking up and down Mount Kato for the last CP would take longer than 15 minutes. We cut our losses and biked back to Minneopa State Park in a hurry, not knowing if other teams had finished before us, or if others would be able to garner all the CPs and reach the finish less than 15 minutes after us.
We crossed the finish line in 6:16:02 and waited nervously as time ticked ever-so-slowly. Nobody had finished before us, so the wait was on. Ten minutes later, team GearJunkie.com came across the line, but they had skipped 4 CPs to our 1. Another minute later Tom and Andrew (24Seven) came across the line, finishing with all the CPs from Mount Kato.... With our 15 minute penalty for skipping a CP, we came short of the overall win by 4 minutes. It was an awesome race though - very competitive from the get-go with several Minnesota teams pushing us the whole time. We definitely enjoyed hanging out at the post-race picnic with the local AR community as well.
Top 4 Overall - After Penalties
1) Free Candy (24Seven) - 6:26:53 (2PO)
2) WEDALI - 6:31:02 (4PC)
3) Gnome Hunters - 7:22:34 (4PC)
4) Team GearJunkie.com - 7:26:05 (4PC)

Molly and Justin, sporting their Minnesota Orienteering Club jerseys, competed in the City of Lakes Tri-Loppet on June 27, 2009. This sprint triathlon, which consisted of an 8k paddle, 5.3k trail run, and 11k mountain bike, took place in the heart of Minneapolis on the chain of lakes and in Theodore Wirth park.
MoBiz, paddling together in a Wenonah Minnesota II and rocking their Aqua-Bound kayak paddles, began with a swift start near the front of the pack. Several hard-core paddlers enter this event, so it's always interesting to see what types of racing canoes and kayaks will show up (and smoke you) in the first leg of the race. After ~45 minutes as racing as a doubles team, we beached our boat on shore and each of us set out on the run, trying to catch up with the lead crowd. 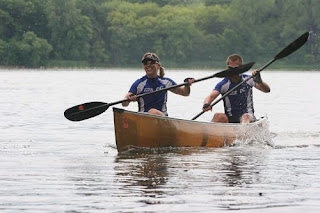 The run in Theodore Wirth was a scenic tour up and down most of the larger hills on the southern end of the park. Molly and Biz both pushed hard, passed a few racers, and completed the run course in 28:53 and 25:00, respectively.
Onto the bikes to pick up more spots, the course had a wide range of terrain, from smooth paved to muddy single track. A few ups and downs were thrown in to keep the course interesting, including the high point of Minneapolis, located in Theodore Wirth Par 3 golf course. Molly finished the bike leg in a time of 34:13 and Justin in a time of 29:14. 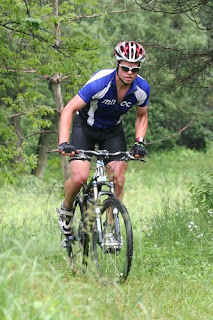 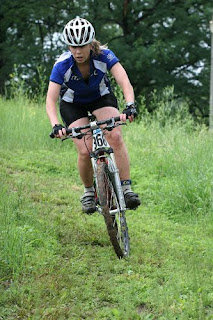 After we had caught our breathe and consumed a bit of watermelon, Molly had posted the 4th fastest time for the women in a blistering 1:48:07. Justin had a solid effort and claimed the 8th fastest overall time in 1:39:15. It was a great day for us and the rest of the MNOC crowd, as several other members posted top spots and personal bests.
Newer Posts Older Posts Home
Subscribe to: Posts (Atom)