On January 16, Molly & Justin teamed up with 24Seven athletes Tom Puzak and Kelly Brinkman for another Rainbow Unicorn adventure weekend. Making the trip down to the Hoosier National Forest of southern Indiana, the Unicorns would tackle the 40+ mile beast that is the Purdue Outing Club Adventure Race (POCAR).
Despite its branding as an adventure race, POCAR is basically a long trekking section - no biking or paddling. The race was divided into three ROGAINE legs, each of which we would plot individually after the completion of the prior. The race started in 30 minute waves, and due to our late registration, we were seeded in the last of three waves, to start at 1pm.
The weather in Indiana felt very warm. The forecast called for about 45 degrees, and it felt like 55. T-shirts for all 4 of us - awesome! After Biz and Tom plotted the points, we started the first loop fast and knocked out the first 8 CP's in a counter-clockwise loop around the lake in about 3 hours, 20 minutes.The CP's on this loop were all placed perfectly - we found them without any problems and we were all feeling great. 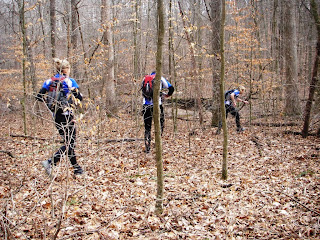 After plotting the second leg of the race, we made haste to catch the team ahead of us, Team Midwest Mountaineering (Team MWM), a fellow Minnesota-based team who had started in the 12-noon slot ahead of us. 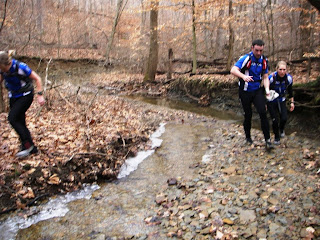 The second loop was not quite as good with respect to control locations. We were given a wrong UTM and were chased down by an SUV carrying the correct coordinate. We replotted and noticed the 2km difference, which definitely changed our strategy for CP order on this leg. We grabbed a different CP first and headed to the second as the sun was going down. Unfortunately, we weren't able to find that CP in the dark because it was placed a) 100M away and b) in a very deep and steep reentrant behind a tree. The CP was marked adjacent to a man-made pond on a hilltop, the only pond within a kilometer radius. We left the theoretical CP location, only to find out from CITGO/Gray Goat near the third CP that the second was in the aforementioned reentrant NE of the target.
We ran into Team MWM at this time, and they had missed the previous CP as well. We all decided that it was worth the extra 5km trek to go back and get it, so we traveled as a solid crew of 9 people. When we got back to the CP, Tom untied it and moved it up to the pond, upon Biz's suggestion. Biz doesn't take matters like this too lightly, but the nature of this race seemed to be fairly low-key and we felt that many of the later teams would struggle to find it in the prior (incorrect) location as well, especially in the dark. The round trip cost us just under an hour, but kept us in contention for the win with all CPs. The second loop ended with a cool team challenge involving teammates balancing on webbing that steadily got further apart.
After finishing the challenge, our team was ready for the 3rd and final leg of the race. But where were the third loop's UTM coordinates? The guy who had them left the TA! We were told that he was making a 2k trip to check the location of the 3rd CP (which we had also lost 20 minutes trying to find as it was 50M off and on the side of a reentrant in which it was marked at the low point). We weren't too upset about the opportunity to sit and eat, but waiting for organizational issues always extends the length of the race and allows other teams to gain distance.
After plotting the third loop with Team MWM and Citgo Gray Goat, we went off into the woods determined to finish this epic challenge. We found the first, second and third CP's without any trouble. They were a good distance apart though, and took approximately five hours worth of time. We had a bit of trouble with the 4th CP, likely going down the wrong reentrant and double guessing our route/location. We were never really lost, but we took a ton of time studying the map, always being very close but perhaps never exactly correct as to which part of a monster ridgeline we were on. We likely dropped another 20-30 minutes here, but with only one CP left, we knew we had to push the pace back home. 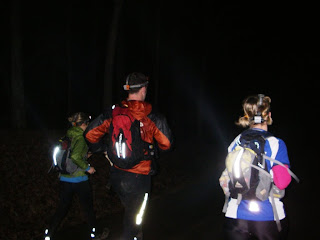 The final CP offered no problems and we did the final 4 miles or so back home on the road. We came into the finish in 1st with a race time of 18 hours and 5 minutes, with Team MWM finishing 23 minutes back (19:28) and Citgo/GrayGoat soon after.
The overall terrain of the Hoosier National Forest provided a great backdrop of big elevation (by MN standards), reentrants so deep and open they felt like slot canyons, and clear streams with gorgeous blue rock. The POCAR crew put on a decent event with lengthy distances between CPs, great route choice challenges, and sweet ropes challenges. Consistency in the future could definitely make this a premier orienteering adventure event.
Newer Posts Older Posts Home
Subscribe to: Posts (Atom)