On September 25, WEDALI headed south to the Land of the Ozarks for the Berryman Adventure Race, an annual 36-hour sufferfest in the Mark Twain National Forest of Missouri. With a tough late-season race schedule taking it's toll, Andrea stepped in for Scooter five days before the race to join Erl, Mo, and Biz for this competitive event, put on by Bonk Hard Racing. Jason made the trip as well, and was a great help in finalizing team logistics. He also raced in the 12-hour as a last minute sub and volunteered for the Bonk Hard Racing crew. 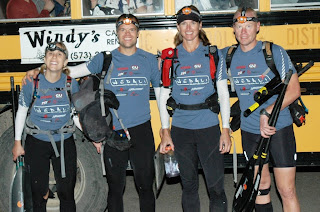 To begin the event, racers were transported by bus from race headquarters in to Round Spring, where the race was started at 11PM on Friday night. With the initial orienteering/trekking section, things were a bit crazy at the start, with teams crawling all over the woods. We took a few "interesting" route choices, and a few minutes here and there led to a confirmed 20-minute lag on the night O-section behind lead team Alpine Shop.

We made a decent transition onto the from Round Spring to Powder Mill. The first hour or so was in the dark and we watched the sun burn off the fog throughout the trip. A couple small sets of rapids and a few wildlife sightings made things fun. Molly fought the sleep monsters a bit, and was entertained by a few impromptu songs by Justin.The recent rains and fast current made the paddle section go decently fast. It seemed like we lacked a bit of urgency to catch up here (or at least maintain our time loss) though, and Alpine Shop handed us another 17 minutes (total of 37 minutes) of time to make up.

After the paddle, we received a few bags of supplies that the race directors had transported to this stop. We refueled our supplies and waded across the Current River to avoid an additional one-mile run. 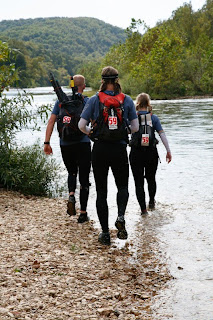 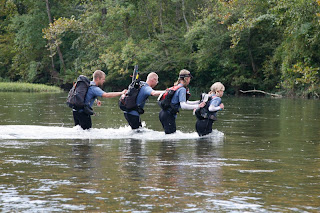 We then trekked from Powder Mill to a few routes that in hindsight may have been iffy - lots of longer road routes around features instead of shorter/straighter bushwhacking routes. The CP at the top of had a great view of the Missouri countryside from the top, but most racers agreed that the gnats and logging slash were less than desirable. We pushed decently well on this section, but a couple of minutes searching for controls and a few minor 5-minute mistakes added up to an even larger time deficit behind Alpine Shop by the time we got to Rocky Falls.

The last 1/3 of the race was a hefty biking leg of 60+ miles. We completed a fair portion of the ride in the daytime, but definitely hit the more challenging portions (such as the single track on the Ozark Trail) at night and at the end of the race. It's a tough trail and we were forced to hike-a-bike a fair bit. A few additional navigation errors/stutters ruined our flow through the latter part of the course, but we finally came into the finish at 11:30pm, with a total race time of 24 hours and 27 minutes.

Alpine Shop had a fantastic showing and crushed the course in 22 hours and 20 minutes - awesome job by that crew to bring it home. Bushwhacker rounded out the top 3 in 32 hours, 8 minutes. 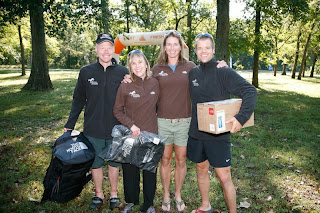 We had a decent race, but after back-to-back weekends of 24-hour+ length events, it will be key for us to rest up well (physically and mentally) before USARA National Championships in Texas next month. Thanks again to Bonk Hard Racing for another fantastic event!

On September 18, WEDALI teammates Scott, Scott, Molly, and Justin prepared for the last Wild AR of the 2009 season; a 24-hour near Carlton, MN. This was also a USARA Nationals qualifier and the last race in the 2009 Minnesota Adventure Race Series, so an important race in our schedule to say the least.
We took a bus to Nemadji State Forest for the 5pm start. Wild's race directors, wanting to get things off to a good start, began the race with a 17.5-mile trek on mostly gravel roads with a bit of sand, forest, and two-track paths. This was a tough go for our team, as the Gnome Hunters pushed the pace from the very start. We kept up despite the effort, not wanting to fall behind on the first leg of the race. We stuck together as a team, traded packs to whomever was feeling up to it, and pushed/pulled each other through the section in about 2 hours and 52 minutes. 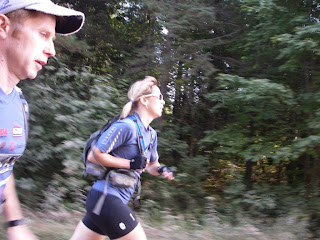 We made a quick transition to our bikes for an off-road section of trails, mostly ATV and OHV. Doing this at night added to the technical element. Biz did an endo over his handle bars at one point, for which Scooter gave him a 10. We passed the Gnome Hunters on this section, but we knew they were hot on our tails. We then popped out onto the Gandy Dancer gravel trail, which took us northeast out onto pavement at Patzau.
The road ride from Patzau to the boat launch on the west side of New Duluth was fairly uneventful, taking County Road B to County Road W to State Highway 23. We tried to push the pace on this section to create a gap, but really had no idea how much faster we were going than the other teams. We arrived at the paddle TA in decent shape, but our TA was a little slow at about 20 minutes.
We then paddled from a boat launch west of New Duluth into St. Louis Bay. Our team ran into some problems on this section with leaky boats, stomach issues, and a 20-minute navigation error. This section wasn't our highpoint, and we lost a bit of time and effort.
We transitioned back to our bikes and rode from the boat launch at Smithville onto the Munger trail heading west.
After a short ride to the TA, we tended to some foot issues and made our way on foot to Ely's Peak for a bit of ropes fun. We hike up to a railroad grade and went east to a tunnel under Ely's Peak. After Molly reached the top of the ascent, The Beautiful People showed up and started to get their gear on. After Scooter was up, the Gnome Hunters had shown up as well. Ascending takes a fair bit of time, but having both of these teams catch up to us while Erl and Biz still needed to get up the ascent made things interesting. 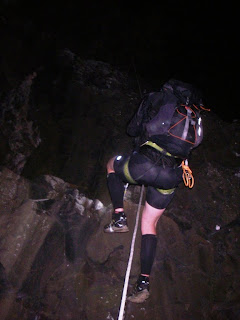 We knew we had lost a bit of time on the paddle, but more so we realized that we would have to keep up a strong pace to finish well. We passed Orion on our way back to our bikes, further emphasizing the competitive nature of the top teams through the race thus far.
We rode on Munger trail west to Jay Cooke State Park, including a quick 1.5 mile loop on dirt trails along the way to pick up two other CPs and prepared for the final major leg of the race; a 12-point rogaine section set by members of the Minnesota Orienteering Club.
We knew we had probably a 30-minute lead over Gnome Hunters and the Beautiful People (since neither team had shown up at the rappel while we were on our way out), but we weren't moving too fast at this point and had no idea how far behind us the other teams were. 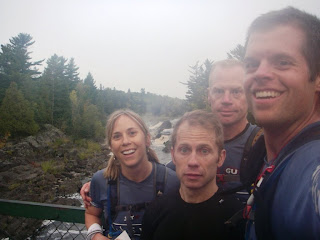 After getting the three O-points to the north, we caught up to Beautiful People since they had just headed out on the southern O-section less than 7 minutes ahead of us. That being said, we figured our lead was slightly under an hour over the next teams, as we knew the Gnome Hunters would be right behind BP and would be likely to do the O-section faster. With their strong navigation and faster run pace, we knew nothing was a given and had limited room for error. After clearing the orienteering section in a little under 4 hours, we were relieved to find that no other teams had come back to the TA. 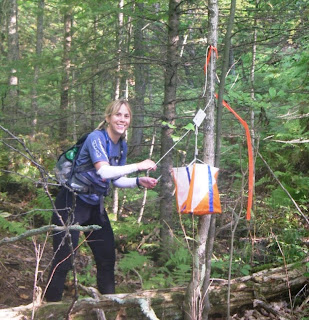 We hopped back onto our bikes and rode west from Jay Cooke back out to Munger Trail and State Highway 210, finishing at the Black Bear Casino Resort in a total time of 17 hours and 15 minutes. 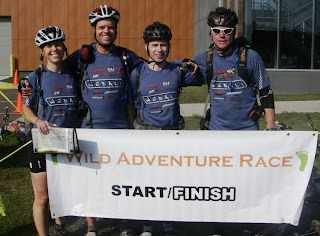 This race definitely pushed our limits, and it was a team effort to come out on top. We had a bunch of issues to deal with, but stayed tough and got 'er done. We were definitely impressed with the Minnesota teams that showed up to race - truly a competitive event. Hopefully more teams from out-of-state will join the mixer in the future. Rumor has it that this race will be part of the Checkpoint Tracker series in 2010....