Jason, Scott, Molly, and Justin represented WEDALI during a recent trip to western Kentucky for Bonk Hard Racing's Land Between the Lakes Challenge.  The 24-hour event, starting on April 2nd, drew a good batch of regional teams and was sure to provide a competitive event for everyone this early in the adventure racing season.
The action kicked off at 7am with a short O-section to split teams up, followed by a lot of classic LBL single-track riding - very doable, but scenic and twisty trails with a little bit of nav to keep everyone honest.
Three hours later we did a TA with several other teams including Bushwhacker, Alpine Shop, and CP0, with Technu and ImOnPoint right on our tails - This was going to be a close race for sure! We thought this trek would likely be the toughest part of the race - a challenging 19 mile O-section with 18 controls to obtain - so doing well here would certainly improve chances for a good finish later on. 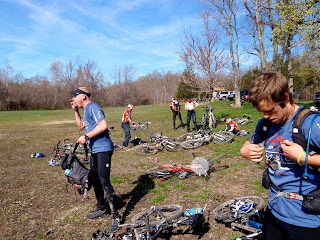 Teams had to return to the TA within 7 hours, so getting all of the CPs was paramount to ranking well against the other squads.  Not far into the course, we ran across this snake while trekking along with CP0. Thankfully it was busy sunning itself, so no worries on any bad encounters. 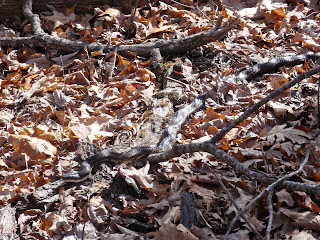 The trek had a lot of upper river reentrant type topography along with plenty of parallel features to mess up the navigation.  Lots of small creek crossings made the trek scenic and enjoyable. 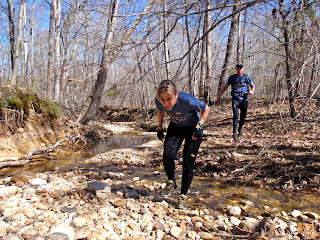 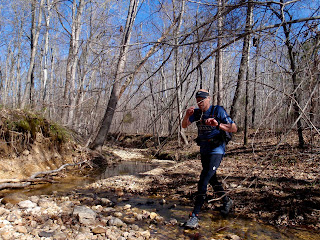 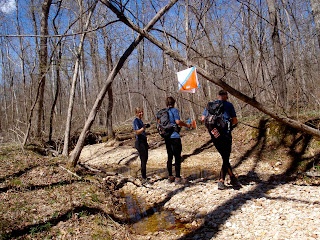 We tried to push hard on this big O-section, knowing this would likely be our chance to pull away from a few teams.  We worked hard to run in areas where the vegetation wasn't too think, but keep a consistent pace in the woods as well. 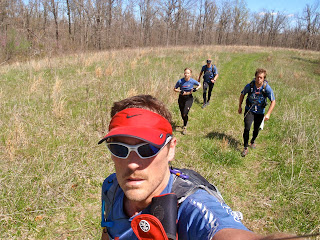 The heat of the day started to wear on us, and a few of us started pulling water from creeks less than two hours into the trek. It was awesome to have a tube of Nuun on this section, not only to mask the iodine taste of the water, but to put back electrolytes that we were sweating off in the heat. 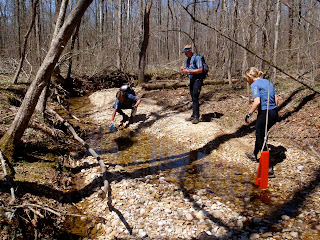 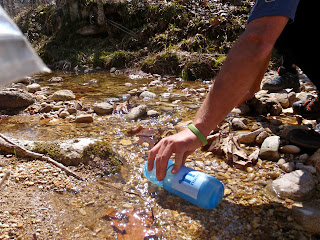 Being from Iowa and Minnesota, this was the first time we hard trained/raced all season in temps above 50 degrees, and the sunny skies were pushing the temps into the mid-70s on this trek. We stopped at a few creeks not only to fill our bottles, but dunk our heads in the refreshing spring water of LBL - Ahhh! 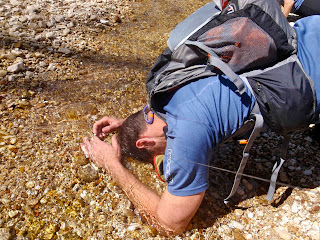 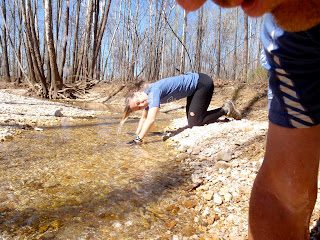 After a little over 5 hours of trekking, we emerged from the woods back to the TA.  No other teams were in sight and the volunteers informed us that we were the first team back.  This was good news and we tried to get out of the TA quick and onto the bike, even though our legs were drained from the effort. 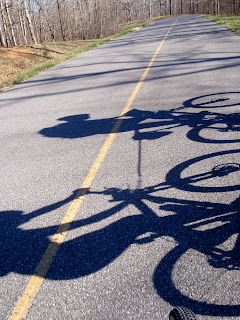 We rode a variety of paved, gravel, and unmaintained roads on the next 28 mile bike leg. 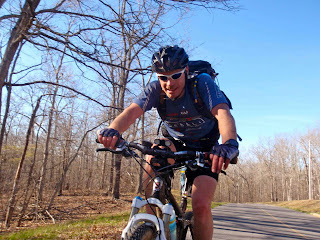 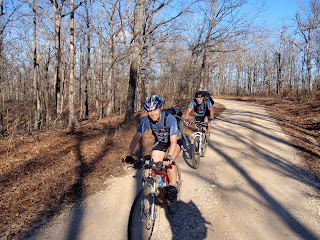 We arrived at the next TA without any knowledge of how we were doing or how far behind any of the other teams were. When we left to run out on the next trek, Bushwhacker was riding into the TA, so our lead was confirmed at less than 10 minutes.  We made a critical error at this TA however and forgot to punch our control card. Luckily we realized this about 5 minutes down the trail, and so we ran back to the TA that we had just left to punch. Our ~10 minute lead over Bushwhacker had been lost, but we were enormously happy to have realized it at that point as opposed to at the next CP, which would have cost us an hour....
After a brief 6-mile trek, we returned to the Start/Finish, which was also CP40. We needed to plot the paddle leg along with the trek and bike sections to return to the finish.  Bushwhacker entered the TA shortly behind us, so we tried to get out quick again. Due to the heavy winds earlier in the day, the paddle had been shortened to 13 miles instead of 16, but this also added another 2 miles of trekking to the put in.
We arrived at the paddle just after dark, knowing that finding the CPs in the dark would be more challenging with so many parallel bay and inlet features.  We paddled at a steady pace, seeing the glowsticks of Bushwhacker about 10 minutes back for most of the leg.  We made a few minor nav errors, but nothing too major in the 3 hour endeavor.
After landing ashore, we TAed quick to a trek back to where we had dropped our bikes, a short 5-mile leg with 3 CPs. These were obtained without a hitch, save for a 5-minute visit to the Bermuda Triangle near the last unmanned CP. Not the best time to lose your bearings!
We got to our bikes and opted for a shorter, single-track biking route home over a lengthier, gravel road ride.  The potential for a team to pass us without our knowledge was there, so we tried to keep the bike pace quick (for a 2am night ride) on the 6-mile leg. We finally came into the finish in 19 hours and 13 minutes. After a quick check of the CP card, we had locked in 1st place! 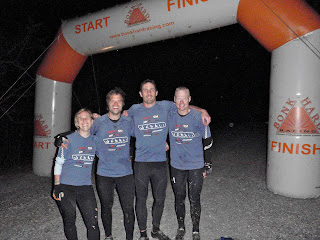 Not far behind, a scant 13 minutes in fact, Bushwhacker crossed the line in 2nd. They raced hard the entire day and had a great effort, pushing us from behind. Alpine Shop, Technu, Checkpoint Zero, ImOnPoint, and Midwest Mountaineering rounded out the top 7 coed teams, all finishing the tough event put together by BHR in good form.