On August 26, Scott, Justin, and Molly toed the line at the 2011 edition of the Thunder Rolls Adventure Race.  The Race HQ was the Luthern Outdoor Ministries center, located just SW of Oregon, IL.  Racers were given their packets with UTMs at approximately 8pm and were informed of the midnight start.  Below, our crew plotted checkpoints and determined routes in preparation for the race. 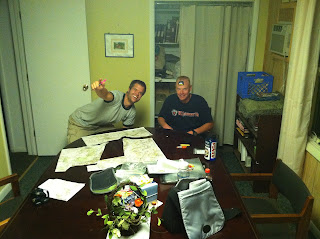 The race would start with a speedy O-course on foot, and teams gathered with paddles in hand in a cool,  dew-covered patch of grass as we awaited the 12am signal to go.  Despite the course being an A-Z route through the entire course, chaos erupted as teams scattered into the woods in different directions.  Teams passed each other running in opposite directions looking for the same checkpoint.  The night nav gave many of the navigators a tough challenge to the start of the race.  The vegetation was thick and often filled with stinging nettles or raspberry bushes, which also punished those who like to take short cuts through the woods (like us!).
The O-course, which also traversed through Castle Rock State Park, led out onto a paddle on the Rock River, where we traveled upstream to a farmers field after a brief 8km effort. We then ran down the farm driveway and up and onto Devils Back Bone, a precariously rocky and thin ridge of land that we rappelled off on the southeast side.  With teams hot on our tail, other crews like Bushwhacker and Alpine Shop arrived at the rappel as we were going down.  Our lead was still slim and the ropes afforded little chance to gain an edge as the first team through
We then hopped back in the boats and paddled downstream to Grand Detour, the birthplace of the John Deere plow.  We completed a solid bike leg on rural country roads on our way out to the Nachusa Grasslands, a  3,000+ acre restored prairie owned and operated by the Nature Conservancy.  Another trekking section in this area provided an opportunity to explore subtle grassland terrain, an area where buffalo used to call home. Over 700 native prairie plant species dot the landscape and the grasses grow 8-10 feet tall in the summer. This can often provide a challenging bushwhacking element of reduced visibility, even in broad daylight.  Alpine Shop would continue to tail us during this leg, and we would see them occasionally running across the open fields.
After leaving the grasslands, we proceeded on bike back over the Rock River and through Grand Detour on our way to the White Pines Forest Nature Preserve.  A quick CP gathered there and then a final push back to Race HQ for the finish.  Alpine Shop was hot on our tails again, and we passed them on our way to the finish - our gap estimated to be roughly 10-15 minutes.  With a short 10 mile bike back to the finish, we clinched the win with the aforementioned narrow margin.  Alpine Shop pushed hard throughout, and our crew was lucky to fend them off in the final hours of the race.  Bushwhacker had a solid effort as well, and came in less than an hour back. Although the race was short for a 24 hour event (we finished in under 15 hours), a lot can be said for each team doing the same exact course (and for sleeping the night after the event!).  It was a hot day in the prairies of Illinois and you can see the relief on our team at the finish line. A strong field of Midwest teams made the victory well earned. 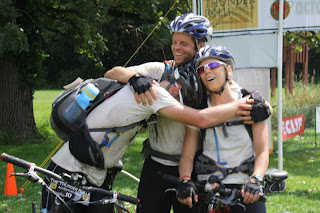 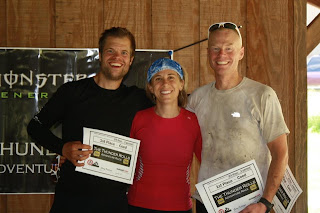